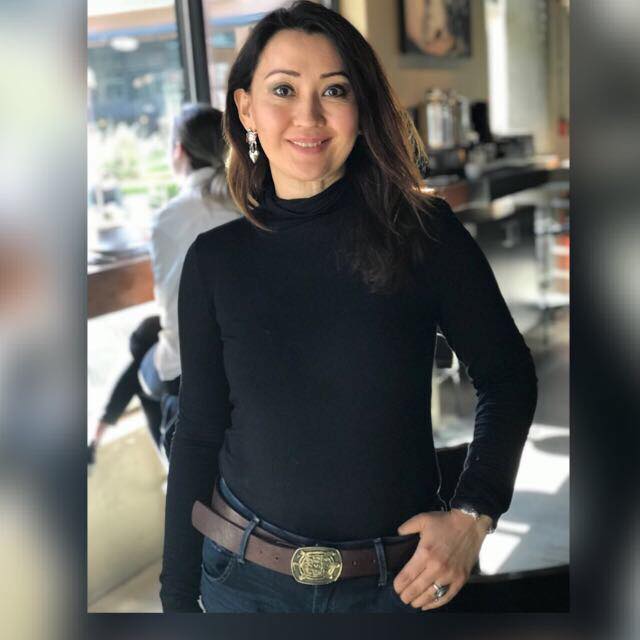 Welcome to our company Lucky Turtle.

The company was created on the basis of art, legend and a lot of stories. It includes my story as well. My name is Leila Akhmet Othman. I am a professional artist specializing in graphics, painting, and tapestry. Sometimes it seems to me that I was born with a brush in my hands. Since the 7th grade, I have already attended an art school, so I chose my future profession when I was young. After I finished the academy in the name of Zhurgenov with excellent marks, having won the rector’s award, I was offered to stay to teach. At the same time, I was actively engaged in the issuing of scientific papers. The theme for one of the works was symbolism and myths. All this symbolism can be seen in my tapestries. The symbolism was how I started my way in art; I still do not stop drawing, because this is my life. My first personal exhibition was devoted to myths about the creation of the world. Causing great interest, it traveled half the world. After leaving to live in America, I entered the Seattle Creative Academy with a specialization in graphic design and animation, thereby expanding my creative abilities. After graduation, I actively engaged in design and art. The history of the creation of the Lucky Turtle brand began in 1998 when I graduated from the Academy in the name of Zhurgenov and began work on my Ph.D. thesis on mythology. One time in a library, I saw an unusual square in one of the books, in which in a certain order the figures in three rows were inscribed. If you stack them vertically, horizontally, or diagonally, the total is the same number every time – 15. I was so surprised that I decided to create a tapestry with this magic square. The canvas was already stretched in the workshop, and I thought, in what shape can this square be fitted? Only a turtle came to my mind. A classmate saw the work and asked about the legend. I did not understand her then, because I did not know anything about it, it was just the result of my inspiration. She told me an old legend, according to which the turtle brings people happiness. Say, in one poor Chinese province a peasant caught a turtle with dots on the shell. The old man created the system of the magic number 15 with this turtle. After that, the province where the fisherman lived began to get poor, and he became the emperor. Legend of word of mouth went around the world. In the Arab societies, this served as the basis for mathematics and geometry, is the absolute symbol of unresolved equations. In China, this gives the base of Feng Shui, because Feng Shui is also divided into nine sectors, each of the figures has its direction. In India, this provides the basis for cosmo-energetics, because each digit has its energy. In Malaysia, this gives the basis for the color scheme, because each number has its color. In Europe, this gives the foundation to the square of Pythagoras. It turns out that this square provides the basis for many philosophies and sciences. Also, astrology and numerology take this square as a basis..

Miracles do happen; I confirm this. After all the difficulties, everything starts to change for the better and the creativity and in my personal life, my financial affairs have gone up the hill. I even went to Tibet to Buddhist monks to learn more about turtles. And it turned out that the symbol has an ancient history. I’m one of those whose life was to be tied to turtles. It was then that I realized that my band of luck began in 1998 when I started to depict a lucky turtle in my works. In 2011, I created the brand Lucky turtle, which is sold in the form of clothes, accessories, ornaments. I started in America, releasing a party of T-shirts. Without much difficulty selling the second batch, I decided to continue the development of business in my homeland. Back in Kazakhstan, I started making talismans, and the turtle moved from the T-shirts to bags holders, bracelets, pendants, souvenirs, scarves, watches and so on. I presented here my new author’s concept, and the business went to cheer. It made an impression on people. There were many good reviews, and sales began to grow. Thus, I have a double incentive. We divided the project into three categories: student, middle-class and VIP so that each person could afford to purchase a talisman. We have opened in many countries of Asia and Europe, in America, business is growing. In the near future, the symbol Lucky Turtle will be used in the interior. It is also planned to launch a new line of Lucky Turtle Creative, also linked to a turtle, but now each digit will have its animal. We will start publishing books, an alphabet for children, video games, applications, and now a musical is in progress. Still a lot of work, but it brings an incredible pleasure because we bring light and good to people. And this, perhaps, is the most important thing!

Who are we? First of all, WE are the team of Wizards! A team of energetic, close-knit professionals who are committed to the common cause and love their work. Our life never stands. Still, it consists of a series of events, and most importantly – every day we win small and big victories. All this is to a certain extent thanks to our friends and teachers. They share an invaluable experience with us; they inspire us with their actions, thoughts, attitude towards the World. In turn, we also strive to share our knowledge and experience, and maybe to adopt something from you, that’s why we will always be happy to accept into our team ambitious, positive, believing in a miracle and ourselves, and good people!